Wednesday!  Baltimore!  Nerd Nite!  Because I’m still wondering “If her loose lips sink ships, what can her other parts do?”  Here is my tantalizing first slide:

Thanks so much to Melissa Miles and Edward Welch for including my chapter, “Hospitable Looking: Towards a Different Way of Seeing the War in Syria,” in Photography and Its Publics. This chapter builds on the paper I presented (thanks for that invitation too!) at a symposium by the same name in Prato, Italy, a few years ago.  In “Hospitable Looking,” I reflect on the pattern of optimism that global publics seem to evince about images from the war in Syria: the sense that each new photographic revelation of atrocity will be the one that finally compels an end to this conflict. Tracing the upwellings of this optimism, I explore the vexed, often solipsistic assumptions about spectatorial empathy that underpin it.  Ultimately, I argue that this conflict requires a different visual ethics.

…  in American Quarterly, “Immersion and Immiseration: Alejandro González Iñárritu’s Carne y Arena.”  Thanks so much to AQ for the invitation to do this work.

… of Roderick P. Hart’s Civic Hope: How Ordinary Americans Keep Democracy Alive.  Thanks to the editors at H-Emotions for the invitation!

Having decided that this year was as good a time as any to go up for full professor, in mid-September, I turned in my dossier for promotion review.  That was quite a process, and I clicked ‘submit,’ I did so rather ambivalently; on the one hand, I knew I had done my very best to prepare the dossier, but on the other, I felt deeply uncertain about whether it, or the years of work it represented, would be enough.

Even when my professional fortunes aren’t hanging in the balance, I think a lot about  what it means to be “enough,” as an academic.  Not smart enough or productive enough or dedicated enough, but just that elusive and entirely non-specific “enough” that so many of us spend our careers chasing.

There are certainly concrete enoughs.  And by now, I’ve been doing this job long enough that much of my awareness of “enough-ness” is instinctive.  Usually, I know when my classes are prepped enough.  I know when a manuscript is done enough to be submitted for review.  I know when I’ve agreed to enough service.  I know when I’ve had enough of a difficult colleague or student and need to bring an end to the interaction.  But other variants of enough are harder to identify.   One of the most elusive enoughs is the one that we struggle to define when we prepare to go up for promotion or tenure.

In the absence of a certainty about enough: panic.  I’d wager that virtually everyone who is in the midst of one of these review processes worries about whether they’ve done enough research to ensure a favorable outcome (notably, my anecdotal survey suggests that people worry less about whether they’ve done good enough research – this is particular kind of fretting seems more quantitative than qualitative.)

Usually, when someone is seeking support at such a professional juncture, well-meaning colleagues and mentors tend to respond with an assurance that they have, indeed, done enough and so they can, or should, just relax.

I’ve given this very advice many times, but on reflection, I’m not sure this is a great approach.

Of course, it is very possible for someone to have done less than the required, or expected, amount of work.  But in my experience, it’s far more common for someone to have done plenty but still worry that it is, that they are, insufficient.  It seems logical, in those cases, to affirm that they have, indeed, done enough, but this comfort is often cold, or temporary.  This reassurance is ultimately ineffective because it accedes to the logic that there is some stable and attainable version of enough and that the candidate has done it.  It is essentially an encouragement to accept the institution’s metrics of approval while also perpetuating the fiction that institutions can, somehow, be satisfied.

The assurance that one has done enough is unsatisfying, in large part, because the plaint itself isn’t entirely rational.  Even though it might appear to be the expression of an individual concern, I believe it’s something else.  When someone expresses a concern that they have not done enough, I think it’s not so much them talking as it is the institution speaking through them.  And there is no reasoning with an institution.  At best, there is placating.  But mostly there is capitulation.

This, I think, is part of the reason that these worries recur throughout the process, that we have to be reminded of our enough-ness so many times.  When we try to talk someone out of an enough panic, we might actually be entrenching the problem more deeply.  Even if it works in the moment, all we have really done is socialized them a little more neatly to the institution’s norms and expectations by saying that they have done enough to satisfy those demands … for now.

In the end, I’m not sure about whether and institutionalized vision of enough is really a thing to which we ought to aspire.  If the ability to rest, or feel comfortable, or truly exhale, is contingent on a sense that the institution is satisfied, we will be deeply uneasy for as long as we work within it.  Institutional satisfaction is often temporary and even paradoxical; consider how many jobs well done and honors ultimately beget more work and responsibility.

No doubt, part of mentoring is helping people navigate institutional procedures and requirements.  But, given all of this, maybe it can also entail helping junior colleagues coexist with feelings of inadequacy rather than reacting to them by increasing anxiety or saying yes to yet another thing.

As I await word about the outcome of my promotion process, I’m experimenting with the idea of setting my own terms of enough.  At this point in my career, and more specifically, my life, this is less a matter of giving myself permission to say ‘no’ (though this is still super important), and more a matter of deciding, independently, what metrics I’ll use to judge the success of my little life.

Oh my goodness!  I am SO EXCITED to be participating in Nerd Nite DC tomorrow!

I’ll be reflecting on an age-old question: “If her loose lips sink ships, what can her other parts do?”  Or: policing women’s talk in wartime.

During World War II, the “loose lips” blamed for “sinking ships” frequently belonged to women, and posters reminded amorous GIs not to share sensitive information in an attempt to impress the ladies. Today, OPSEC (Operational Security) materials for military families warn wives to scrub their social media and keep their husbands’ deployments secret. While men telling women to be quiet is hardly novel, in these cases, talkative women are portrayed as not just irritating but lethally dangerous. These chatterboxes will be our guides through a history of the U.S. military’s approach to the problems of its men liking women, and those women liking to have contact with the outside world.

… of Caren Kaplan’s recent, and masterful, book Aerial Aftermaths.  Thanks to the editorial staff at Transfers for the invitation to spend extra time reading and thinking about it and for publishing my review.

This week’s conversation at In Media Res focuses on the shifting meaning of September 11, 2001, 18 years after.  Thanks to the staff and curator for choosing to include “A Picture of Freedom?”,  my post about a 9/11-themed coloring book.

I spent last week in sunny Lancaster, PA at the Society for the Study of Affect’s first ever Summer School.  Michael Richardson  (I admire his work so much!) and I co-taught a seminar on the theme “Affect // Violence // Mediation” with two groups of incredibly smart, generous, and #SSASSy participants.  I also facilitated two roundtable discussions on “Living an Academic Life” – just so grateful to everyone who shared their perspectives, struggles, accomplishments, and ideas for how to find, enter, or create compassionate intellectual spaces. 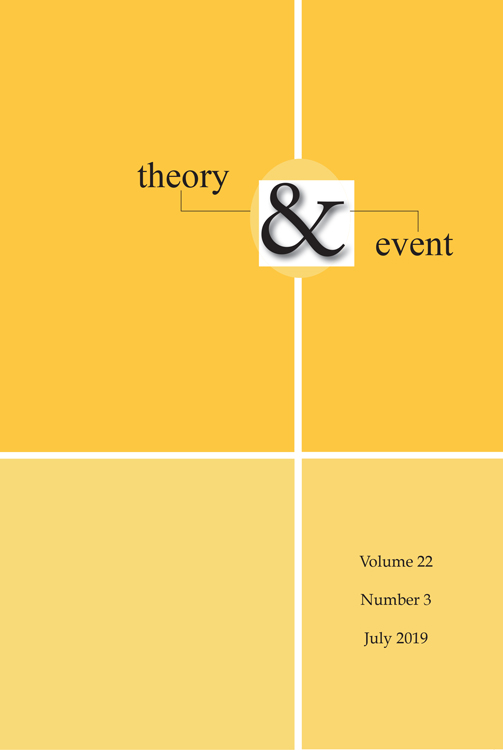 … was just published in Theory and Event.  It’s available here!